Disney’s Hollywood Studios is the hardest Disney Park to tour right now in Walt Disney World.  There are so many top tier attractions to experience:  Rise of the Resistance, Millennium Falcon Smuggler’s Run, Slinky Dog Dash, Mickey and Minnie’s Runway Railway, Rock ‘n’ Roller Coaster and Twilight Tower of Terror that it is hard to create a touring plan here that doesn’t require some waiting in line.

We had a great day visiting Disney’s Hollywood Studios; however, we had to quickly make some adjustments to our original plan.  This is why doing some research (like reading posts on How to Disney) is critical.  By knowing our options, we were able to pivot and still have a fantastic day.

We traveled to Disney’s Hollywood Studios on Monday, March 14th.  The hours for the day were 8:30 am to 9:00 pm with early entry starting at 8:00 am for Disney Resort Guests.

Our goals for the day were to participate in early entry hitting Rock ‘n’ Roller Coaster and Tower of Terror during this time and snagging a Genie+ reservation for Slinky Dog Dash around 10:00 to 11:00 as well as pay for Individual Attraction Selections for Rise of the Resistance around 2:00 pm.

Not to spoil the fun early on, but these goals didn’t happen the way we planned and we quickly adjusted.

The alarm went off at 6:30 am (no sleeping in on Disney vacations anymore it seems) and we hit the bus at Disney’s Coronado Springs Resort at 7:15 that morning having one arrive at 7:30.

The My Disney Experience app was having difficulties that morning and I wasn’t able to get Rise of the Resistance right away at 7:00, but as we were walking to the bus stop I was able to book one for that evening between 7:00 and 8:00 pm.

My daughter was in charge of booking our first Genie+ reservation for Slinky Dog Dash and even though we were on the right at 7:00 am, she wasn’t able to get one until 4:30 pm.

Right away this meant that our typical plan had to be adjusted quickly.

Once we arrived at Disney’s Hollywood Studios, we headed to Sunset Boulevard where we got in line for Rock n’ Roller Coaster.  When the park opened right at 8:00 am, we basically had a continuous walk onto the ride itself waiting only 5 minutes.

From there we jumped over to Tower of Terror where the posted wait time was already at 45 minutes.  Keep in mind only one side was working which was adding to the wait times here.  We waited the full 45 minutes, but had a fantastic drop series making it worth it.

A couple of side notes here:  1.  With one side down, I am wondering if going to Tower of Terror first would have been a better decision since we would have been in the front of the crowd and Rock ‘n’ Roller Coaster loads quickly.

2.  My son is absolutely terrified of Tower of Terror and will not ride it.  Since we weren’t comfortable leaving him out of the queue on his own, he was able to wait in line with us and then once we got to loading the elevators, he loaded his own that took him to where we exited this ride.  I really liked this option as we were able to stay together as a family and he didn’t have to ride something he wasn’t comfortable with.

At this point in the morning the Park was officially opened (opened at 8:30 to everyone and it was close to 9:00) and wait times were already hitting 60 minutes.  Even though we knew they would only get longer, lines just aren’t our thing.

We headed to Batuu to explore, take pictures and enjoy ronto wraps (which I ordered as soon as I could and we still waited almost 20 minutes for our mobile order).

After heading our wraps (which we loved), we took some fun pictures together and then went to a family favorite For the First Time in Forever:  A Frozen Sing-Along.  We hit the 10:30 show and it was absolutely fantastic as it always is.

At this point we had to make a plan for the rest of the day.  We had an Oga’s Cantina reservation in Batuu at 1:00 pm, but with the wait times so long and our lightning lanes for later in the evening we decided to cancel Oga’s and head back to the pool.

We did have lunch at Woody’s Lunch Box back in Toy Story Land which was ready really quickly, but finding a table was difficult as always.

After lunch (right at 12:30), we grabbed a lyft and headed back for rest and pool time at Disney’s Coronado Springs Resort.

We spent the afternoon hanging out at the pool and relaxing which is always a critical part of a Disney vacation.

While we were relaxing, I started to stack our lightning lanes for our evening in Disney’s Hollywood Studios.  Since the park opened at 8:30, I was able to start making more Genie+ reservations starting at 10:30 and every two hours after that.

When we got ready to head back to Disney’s Hollywood Studios at 3:30 that last afternoon, we had lightning lanes for Toy Story Mania, Mickey and Minnie’s Runaway Railway, Star Tours, and Muppets 3D.  There were no options for Tower of Terror or Rock n Roller Coaster all day.

At 3:30 we got our lyft and headed back into the Disney Park.  Our first lightning lane was Slinky Dog Dash where the standby wait was still 100 minutes and we only waited 11 minutes.  Such a fantastic and fun ride for the whole family.

We enjoyed some snacks and saw Chip n’ Dale playing before heading to ride Toy Story Mania where the standby time was around 45 minutes and we waited 10 minutes.  My son, who is a big gamer, loves this ride and the competition.

The family rode Star Tours at 5:30 with lightning lane and walked right on (standby was 45 minutes) and then we all headed to Muppets 3D where we really didn’t need to use lightning lane as their theater wasn’t even close to full.

Our next lightning lane return time was for Mickey and Minnie’s Runaway Railway which was so exciting and my son and husband hadn’t been on it yet.  Wait time had dropped to around 45 minutes and we were able to walk right on.

At this point we went into waiting mode as we had our Rise of the Resistance return time at 7:30 pm.  We had been watching and the ride was up and down all evening so we were just hoping we’d be able to experience it together.

As we waited, we enjoyed the new Mickey Vacation Short which was adorable and fun.  My kids thought that these hidden gems were fantastic and really enjoyed them on this trip.

We headed back to Batuu and got in line for Rise of the Resistance where we had around a 15 minute wait before the first experience.  No spoiler here, but this ride is absolutely fantastic.   Watching my Star Wars loving husband experience it was amazing.

It was now 8:30 and time to head back to the Resort to pack as we were moving to Disney’s Polynesian Resort the next day.

Even though our plans drastically changed for Disney’s Hollywood Studios, we had a wonderful time.  The main ride we didn’t get to was Millennium Falcon Smuggler’s Run and that was because the lightning lanes booked up quickly for this one and we had picked Slinky Dog Dash instead.

Disney’s Hollywood Studios can be difficult to plan for right now, but with a good idea of the park you can adjust and have a wonderful time. 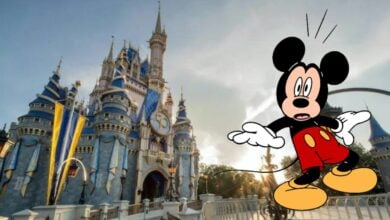 Do NOT Make These Mistakes at Disney 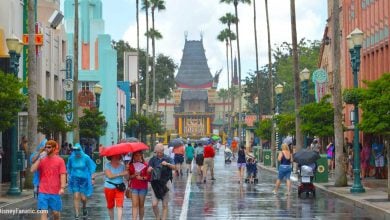 Bring These Items To Battle the Rain In Disney 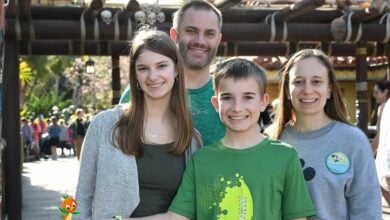 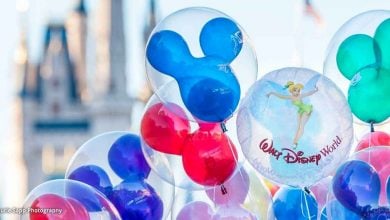