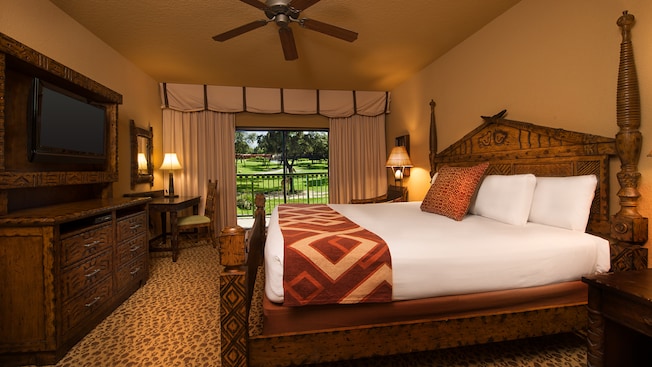 You and your group are in for a one-of-a-kind adventure set in the wilds of the African savanna when you book a stay at Disney’s Animal Kingdom Lodge. The resort opened back in 2001 and is located approximately a mile from Disney’s Animal Kingdom Park. It’s theme and architectural styles are reminiscent of conventional African game lodges, which follow a horseshoe-like shape and design pattern that allows for optimal animal viewing. And yes, the resort does in fact feature more than 30 actual real life African animal species. Over 200 hoofed inhabitants and several different kinds of birds make their home right on the lush savannas surrounding the resort.

By 2006 it was announced that Disney’s Animal Kingdom Lodge would expand to become the site for a new Disney Vacation Club property. This led to several existing guest rooms in Jambo House to be converted into new villas as well as the construction of Kindani Village—a brand new building comprised entirely of villas. Disney’s Animal Kingdom Lodge Villas range in varying accommodations, including one- and two-bedroom distinctions, with most offering views that overlook the surrounding African savannas. There are also three-bedroom grand villas that can accommodate up to 12 guests, with one king bed, four queen beds, and a queen sleeper sofa. All villas offer in-room amenities, such as Internet, televisions, a washer/dryer setup, fully equipped kitchen, two to four bathrooms, and so many other features to leave you awestruck.

You will find plenty of recreational pursuits to enjoy while staying at both Jambo House and Kindani Village. Discover a tropical oasis at Jambo House’s Uzima Springs Pool, which spans 11,000 square feet and faces the nearby savanna of the same name. This zero-entry pool also features a 67-foot waterslide, and poolside bar. At Kindani Village there is Samawati Springs, which is also a zero-entry pool, spanning 4,700 square feet and boasting a 128-foot waterslide. Other interests around the resort include whirlpool spas, playgrounds (and the Uwanja Camp wet activity playground in Kindani Village), the Zahantu Health Club & Spa, massage services, an arcade, and Simba’s Clubhouse for kids. And of course, observing the resident animals at home makes for one of the most unique experiences to have at any resort. You can even take the Wanyami Safari for a private up close look at these remarkable creatures. The safari can be had as a dinner package when you dine at Jiko—The Cooking Place. Another unique dining opportunity can be had when you dine with an Animal Specialist at Sanaa via a four-course spread. Additionally, you’ll find many other dining options available to you as well, including buffets, quick-service meals, and even lighter bites and drinks at on-location lounges.