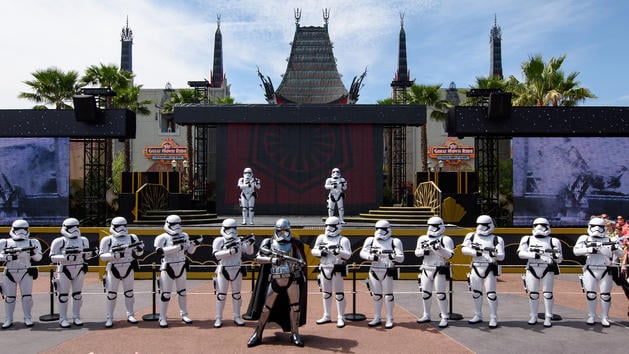 And what would the troops be without there intimidatingly beautiful captain Phasma? This silver Storm Trooper leads the previously mentioned March of the First Order, giving out commands and addressing the crowds of onlookers in the fierce authority only a captain of an evil army can do. She addresses the public, drills the squad, and gives a proper blaster demonstration. Though it is not your typical park parade, it’s still enough to make any seasoned Star Wars fanatic geek out. Though she may not be a Meet and Greet character, the interaction and performance are always something completely unexpected.

Hang on to your devices, these hooded mischief makers are always scurrying around the launch bay looking for spare parts. Unlike the rest of the launch bay characters, they are not found in a queue. Instead, they are seen mingling about with guests as they make their way to their desired branch of the bay. In a way, this perfectly accents their character. Their hooded forms and glowing eyes present a puckish nature when lurking about the darkened Mos Eisley segment of the area. If you want to get a good picture, be sure to have your flash, or you’ll end up with some eerie floating eyes. Not bad for Tower of Terror, but that’s in another star system.

Star Wars fans of any age can appreciate the Jedi Academy Training show by Star Tours. Kids will fulfill their dreams of fighting the Sith/First Order and joining the ranks of the Jedi, while adult fans can’t help but aww at the sight of cute, miniature Padawans. The characters present can be a bit of a mixed bag, ranging in faces from Clone Wars, Rebels, or the films. Either way, there are characters abound. Guests might see Asoka, Anakin, Darth Maul, or any other mix of Jedi and Sith as the Younglings prepare to take on the fiendish forces of the Dark Side. No matter how you slice it, it’s a fun show for kids and the kids at heart who enjoy the epic lightsaber battles.