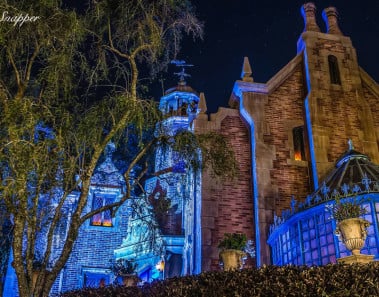 During your ride on the Doom Buggy in the Haunted Mansion attraction, in the graveyard scene, take a good look at five ghostly busts with the projected faces of five vocalists as they are singing the tune, “Grim Grinning Ghosts”.  For many years there have been rumors that one of the faces on one of the busts is that of Walt Disney himself.  This rumor is a myth.  The face which does resemble Walt is actually that of Thurl Ravenscroft, an actor/singer who was also the voice of Tony the Tiger from the Kellogg’s commercials, Tangor, Fritz, and various Tiki masks in The Tiki Room attraction, various singing pirates in the Pirates of the Caribbean attraction, and the voice of the Grinch singing “You’re a Mean One, Mr. Grinch” from the popular TV animated cartoon.  There is a slight resemblance to Walt with the same style mustache, but this fact is a myth.