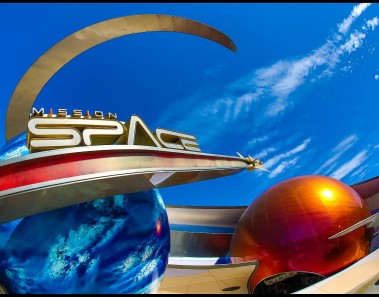 Someone once said that space was the final frontier, but if you want to get on this ride, you should probably do it earlier in the day. It is an intense simulation of rocketing off to Mars, using a centrifugal motion simulator to create G-forces similar to what astronauts face. You and three others man a spaceship that sling-shots around the moon and straight to Mars. It's one of the most intense rides in Disney World. It was so intense, Imagineers added a “green” version for those who are prone to motion-sickness in which it doesn't spin.  If you are looking for a thrill ride, Future World has you covered.

The friend of Mission: SPACE, Test Track allows guests to create their very own car then hop into the test car, where you race around tight curves, rough roads, and climb hills three stories tall.  Your concept car will be tested on responsiveness, power, efficiency, and handling as you travel through the test track. Afterwards, you can see how well your designed car did and even make a commercial for it. It is one of the fastest rides at Disney, reaching speeds up to 65 mph so you may want to hit this before lunch instead of after