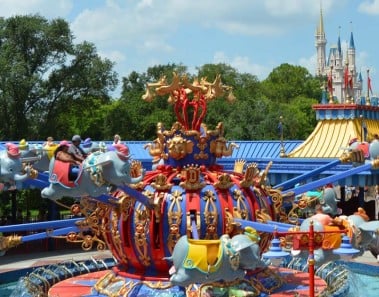 This attraction has been a part of Walt Disney World’s Magic Kingdom since opening day on October 1, 1971.  With the expansion of the New Fantasyland which had its grand opening on Dec. 6, 2013, this iconic Dumbo attraction became a part of the new Storybook Circus.  After some sprucing up and refurbishing, Dumbo, the Flying Elephant was joined by another Dumbo, and this festive attraction is now twice the fun, with side by side Dumbos spinning in the air in opposite directions.  Another fantastic feature of this attraction is the interactive queue.  Guests enter the big top tent, into a pre-boarding area where they are given a pager that will buzz when it’s their turn to ride.  Sometimes the wait is too short, because there are so many fun-filled games and interactive activities that parents and children alike are enjoying themselves so much that they forget about flying with Dumbo.  But then the pager buzzes, and its gather up the kids because it’s time to fly!