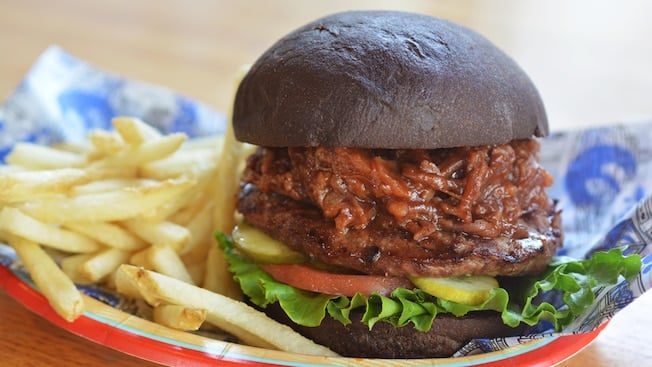 Has a boat just dropped anchor on Echo Lake? No, it’s Dockside Diner—one of the many great quick service locations to be enjoyed at Hollywood Studios. Housed in a building distinguishable for its ship-shape likeness, Dockside Diner is a great place to walk up to, order from, and then find outside seating at from one of many surrounding umbrella tables. Until recently, Dockside Diner was officially known as “Min and Bill’s Dockside Diner,” named for the classic 1930 film, Min and Bill, which starred Marie Dressler and Wallace Beery as a dockside innkeeper and a fisherman tenant. But for many years people have simply referred to this counter service location as “Dockside Diner.” All the same, whatever you call it, Dockside Diner features a sea of delicious selections that guests frequently come fishing for. They even open bright and early for breakfast with special enticements like the Egg White Breakfast Burrito and the Bacon, Egg and Cheese Breakfast Burrito. Assorted bagels, fruit, and cinnamon rolls are also available at this time. But it’s really what you get for lunch and dinner that has crowds flocking here. Perhaps the most popular item on the menu is the renowned Carolina All-Beef Foot Long Hot Dog, which comes topped with pulled pork and coleslaw and served with chips. Other favorites include the Barbecued Pulled Pork Sandwich, Chili-Cheese All-Beef Foot Long Hot Dog, and Loaded Chili Cheese Nachos. Milkshakes and other beverage specialties (both with and without alcohol) also make for favorite finds.

Stepping through the doors of Backlot Express is a lot like stumbling into the backdoor of a movie studio, with all the theming and décor set up to resemble the behind-the-scenes backstage area of the latest Hollywood film in production. From the populous props to surrounding glamor and glitz of movie memorabilia, you’ll be momentarily wondering whether or not you only came for food or to also get ready for your next starring film role. You’ll be eating like a celebrity on break between scenes, relaxing in casual comfort and feasting on delectable yet rapidly prepared fare you don’t have to wait very long for.

Because of its close proximity to Star Tours - The Adventures Continue, the menu even features some signature entrée selections that follow in the Star Warstheme. Some examples include the Royal Guard Burger (served on a black bun), Galactic Salad (or Galactic Chicken Salad), Dark Side Chicken and Waffles, and desserts like the Kylo Ren Cupcake or BB-9E Cupcake. Refresh yourself with a Padawan Limeade served in a BB-8 Souvenir Stein with a Death Star Cube, and for adults ages 21 years and older there’s Galactic Lemonade with Tito’s Handmade Vodka, Guava, and Odwalla All-Natural Lemonade. Other starring hits on the menu not exclusive to the Star Warstheme include the 1/3 lb Angus Burger, California Chicken Club, Caprese Sandwich, All-Beef Hot Dogs and Chili-Cheese All-Beef Hot Dogs, Chicken Breast Nuggets, and more. Backlot Express is open daily for lunch and dinner.