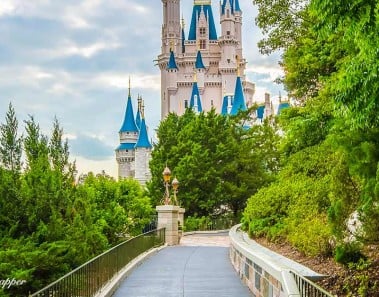 As crowded as the parks get, there are often still ways to navigate them without having to "swim upstream" through the herd, so to speak.

For example, in Magic Kingdom, if you want to get from Main Street, U.S.A. to Tomorrowland, you don't have to take the main bridge to the right of the castle. Turn right before that point—just after the ice cream parlor—to walk through the Tomorrowland Terrace instead. This path rarely gets crowded unless a major event is happening around the castle.

In Animal Kingdom, if you're heading toward the exit from DinoLand, you could follow the crowds around the buildings on Discovery Island. However, we've found that walking straight through the Discovery Trading Company shop is a great shortcut that is not only less crowded, but lets you get out of the sun for a couple minutes.

There are paths like these in all four parks. Do some exploring and spot some of your own!