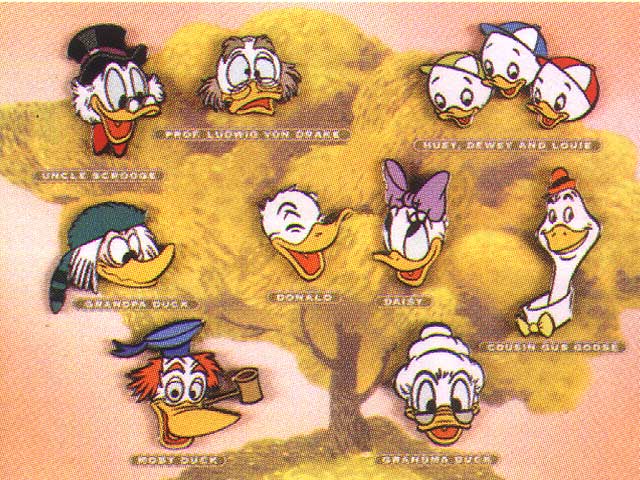 Donald has a pretty extensive family lineage, which has been traced, clarified, and lined out accordingly over the years. It has been confirmed that he shares ties, either through birth or marriage, with just about every family in Duckburg.

Donald's parents are Quackmore Duck and Hortense (McDuck) Duck. His twin sister is most notably referred to as Della but has been alternately known as Dumbella or Thelma. She is the mother of Huey, Dewey, and Louie. Many sources claim that she is married to Daisy Duck’s brother, whose surname is also Duck (no relation). Don Rosa explained that the name “Duck” is common, much like the surname of Smith or Jones, when he published his own Duck family tree in 1993, which was included in a 12-part comic series. This offers an explanation into why Daisy’s last name is also Duck and also why Huey, Dewey, and Louie refer to both Daisy and Donald equally as aunt and uncle.

Then of course there’s Scrooge McDuck, brother to Donald’s mother Hortense. Other feathered relations to Donald include the Gander, Coot, and Goose families, with a little Loon, Grebe, Mallard, Gadwall, and O’Drake thrown in as well. Birds of a feather really do flock together, at least in Donald’s family.