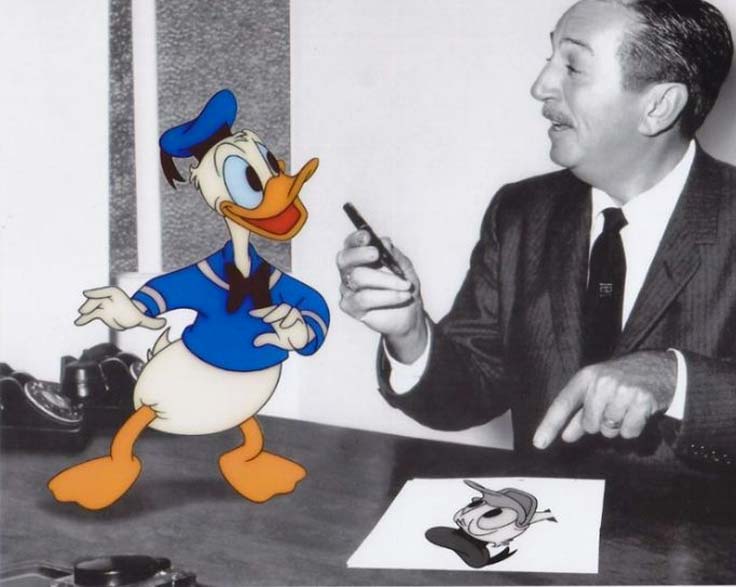 Donald Duck is the only major Disney character reportedly known to have a middle name. In the 1942 cartoon, Donald Gets Drafted, it is brought to light that his middle name is “Fauntleroy,” making his full name “Donald Fauntleroy Duck.”

On another side note, while the name “Donald” serves well alliteratively, the decision to choose this name specifically may have come from the renowned Australian Cricket player, Donald Bradman. While touring North America with the Australian team in 1932 Bradman made headlines by revealing was being dismissed for a “duck” against the New York West Indians. At the time Walt Disney was already in careful contemplation about who would be Mickey Mouse’s new friend, and hearing about “Donald’s duck” throughout the press might have had a nice ring to it.

There’s been a lot of back and forth surrounding Donald’s real birthday. In keeping with cartoon tradition, a character’s birthday is usually recognized as the official date in which they made their premier. This would place Donald’s birthday on June 9, 1934. However, in Walt Disney’s The Life of Donald Duck—the authorized biography published in 1941, it was revealed that he was actually born on a Friday the13th. Perhaps this is why he isn’t such a lucky duck!

One late ’40s cartoon in particular divulged Donald’s date of birth as being on March 13. So in working with all the facts, the evidence supports that Donald Duck’s birthday is most likely March 13, 1914. All the same, Disney Parks refer to Donald’s debut date when scheduling special birthday celebrations and events.